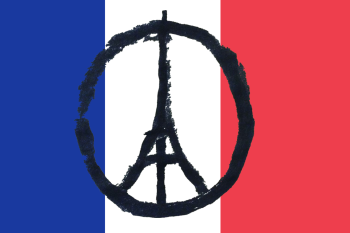 If there ever could be a way to honour and give the best possible meaning to the tragic loss of so many young lives, it would be in how we react to the Paris attacks. The most fitting, effective and beneficial memorial would be to bring all people together to resolve an ongoing problem that threatens to spiral out of control and haunt our future.

The astro-events help us to see what is happening and put it in perspective. The evening of Friday 13th in Paris will be seen as a key a trigger moment in world history. After an autumn full of brutal misunderstandings, symbolised by the Sun, Mercury, Venus and Mars conjunctions to Jupiter in Virgo, opposed Neptune in Pisces, the underlying focus moves to Saturn in Sagittarius’s first square to that Neptune on 26th November 2015, which will be ongoing through 2016, with the square retrograding to exact again on 18th June and completing in September 2016. The potential for serious misunderstanding, the lethal consequences, and the ways of averting them are fully studied in the November edition of The Astrological Journal ‘Working with the Planets’ column.

The chart drawn for Paris at 2120 CET 13th November 2015 clearly shows the horrors of that evening as triggers that could very easily lead to far more horrible sacrifice and suffering in the months, even years ahead. The Moon, the ascendant ruler, had moved from a conjunction to that Saturn, to square Neptune, and then to square Jupiter twenty hours after this. The Moon was at its most potent waxing point of its monthly cycle; just over two days after being new. The attacks started at the moment that Mars [a day from its Libran ingress and conjunction to the North Node, itself just having retrograded into Virgo] had crossed the IC, while the MC had just crossed the South Node and entered Aries, ruled by that Mars. It is difficult to imagine a more potent trigger; intensifying when the Cancer ascendant moved into Leo as the attacks climaxed. 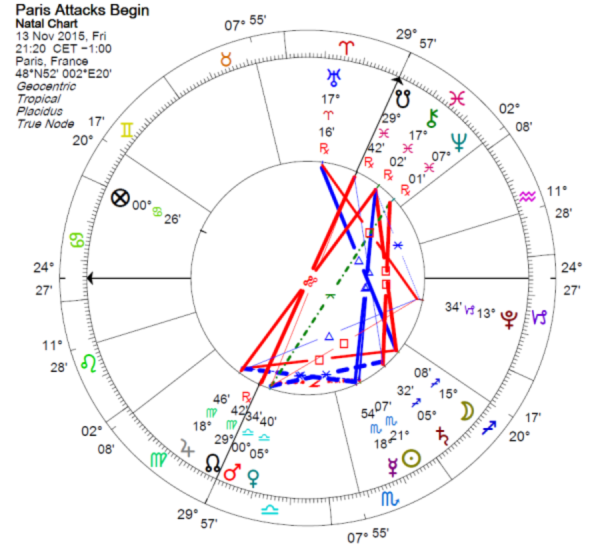 Knee jerk reactions will be in the minds of many, as the ruling Moon trine to Uranus in Aries is retrograding to narrowly avoid completing yet another one of those terrible squares to Pluto that have symbolised so much destructive upheaval over the recent years. With Mercury trining Chiron and sextiling Jupiter, while Venus is sesquisquare to Neptune and sextiles Saturn, we may be keen for revenge, but this is the last kind of action we should contemplate.

The first insult to those who have died and their families is for politicians to claim what has happened justifies precipitous action in support of one their pet policy initiatives. Post 9/11, the US Presidency squandered world-wide good will and many feel tarnished the memory of the Twin Towers dead, when what had happened was used as the impetus to invade Iraq; the consequent destabilisation is not unrelated to the deaths we mourn today. This time we can do better than that!

Events like 9/11 and the recent Paris atrocities evoke heartfelt sympathy from many different cultures all over the world. The way to turn such events into goodness that honours the memory of all who died is to harness this good will to decide common actions for the common good. Could it be that ISIL is the catalyst common enemy that unify us in such an enterprise?

Time to put aside division! The astrology of the time may well show the potential for great misunderstanding and suffering, but it is also ripe for peoples to replace narrow aims of national and cultural self interest with clear unified actions that sweep away intolerance and replace it with open-minded mutual respect. Then we will all feel safe.