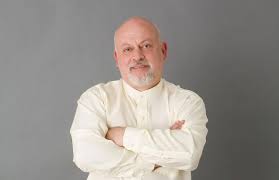 As well as this page, a special section of the July Astrological Journal will be devoted to Jonathan’s memory. Comments and extracts are being compiled by the Editor Victor Olliver. If you have memories and tributes you would like to be included there or on this special web page, please email Victor at: journal@astrologicalassociation.com

It was in 1990 that I first met Jonathan Cainer. We were at the ITV studios, participating in the recording of a James Randi programme to ‘examine the validity of astrology’. Jonathan had agreed to do the chart of a ‘mystery guest’, who turned out to be Hugh Laurie, accompanied by Stephen Fry. I thought he did a pretty good job, although both men seemed determined to disagree!

Beginning around then and increasingly ever since, this has been an ongoing part of Jonathan Cainer’s life in the limelight; taking the brunt and answering attacks from a strange alliance of entertainers and academics who seem to think that astrology is a phenomena to be attacked without knowing anything about it.

Only a part, of course! He will be mainly remembered for his remarkable ability to take just one key concept (the Sun’s birth position)], relate it the changing movements of all the planets in heavens that day, and write sensitive general comments that helped millions of individuals throughout the world understand their lives. Many astrologers may feel that only considering the Sun and excluding other birth planets over-simplifies astrology; even makes it vulnerable to attack. Always sensitive to this, Jonathan used his Sun sign (‘stars’) columns as a bridge to broaden the public’s astrological understanding and to promote other astrologers and their activities. Significantly, this section of his column on the day of his death was focussed on Pluto. He wrote: “Some of my colleagues wonder whether its current position, one not previously attained since its discovery, is linked to the way we have lately lost so many celebrities.”

Above all, his remarkable gift to make generalised Sun sign comments relevant to individuals is shown by what he wrote for his own sign (Sagittarius) for 2nd May 2016 – the day of his death.

‘WE’RE not here for long. So make the most of every moment. We forget this so often, and get caught up in missions, and desires. We think we have forever and a day. In one way, we may be right — for are we not eternal spirits, temporarily residing in finite physical form?’

Maybe not every Sagittarian in the world died on 2nd May 2016, but a very important one did and, for the rest all with Saturn transiting their sign, Jonathan’s words will open the deep purpose of their lives… and that is pretty relevant too! Thank you Jonathan – thank you so much!