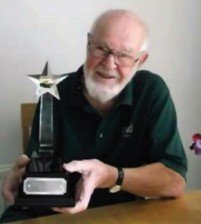 Richard Llewellyn was the first UK astrologer I met on my return to the UK after a long pilgrimage across the world, followed by six years practice overseas. The hospitable welcome to his then home in Totnes was interrupted by a phone call from Bruno Huber in Switzerland, and the men’s long-distance toast with a whiskey at each end of the phone.

Richard established the English Huber School with Pam Tyler and became its Principal. How his remarkable understanding and energy developed the School (now API [UK]) is described below by his friend and colleague Joyce Hopewell.

Dick, as he was known when I first met him, was the Astrological Association’s Membership Secretary from the early to mid-1980s, being crucially involved in Conference organisation. He joined Association Council again for a little while in the early 1990s.

In the early years of the 21st century, the AA Council accepted that technology had passed beyond tape and then CD recordings of Conference talks. I well remember the crucial day, when my wife Carolyn and I drove to Pip Royal’s* lockup in the West County. We collected large boxes of tapes and CDs. Then onto South Wales to deposit some to a volunteer for conversion to MP3s. Then on to Greasby in the Wirral to have dinner with Richard and his partner Elly who the next day gladly accepted responsibility to convert the lion share of the tape/CD collection.

In the years that followed, they were to apply a rigorous standard to the work. When converting past masters was completed, they continued to edit future years’ recordings painstakingly and present them for online uploading. Then they volunteered to scan the lion share of the Association’s Astrological Journal from 1959 and Correlation from 1968. Richard even took on preliminary work cleansing the Association’s Chart Data Collection. At the same time, now in his nineties, he continued to offer phone-line consultations.

Without all this devoted time-intensive core work, the brilliant spoken and written words by great astrologers of more than sixty years would not, as they are now, be immediately available to the world in perpetuity.

In acknowledgement of his long-life commitment to advancing and preserving astrological understanding, in 2013 Richard was awarded the Charles Harvey Award for Exceptional Service to Astrology.

Richard was a lovely generous soul, wise in his kindly innocence; a fine example of the very best that astrological understanding can create within us.

*For many years, Pip had supervised the recording of conference talks, and then stored, copied and supplied order