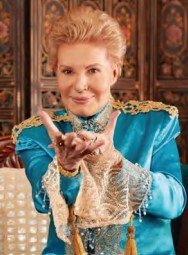 The hugely popular Puerto Rican television astrologer Walter Mercado – who was also an iconic gay figure in the Spanish-speaking world – died on 2 November 2019 at the age of 88 (some reports say 87).

His daily astrology prediction shows were broadcast for decades throughout Latin America, Puerto Rico and the United States and were known and loved for their “melodrama”, according to a Time report. The news magazine described his TV performances as “delivered…with an exaggerated trilling of the ‘r’. He favoured colourful brocaded capes and huge gemstone rings, which he flashed while pointing at viewers”. He owned more than 2,000 capes, many bejewelled, embroidered or feathered.

The HistoryMiami museum reports that Mercado’s shows “reached 120 million Latino viewers a day for more than 30 years”. The BBC added: “Some lucky viewers would be promised romance, others were urged to stop holding grudges.”

Time magazine wrote that “Mercado never publicly discussed his sexual orientation but his screen presence was a source of comfort for many people in lesbian, gay, bisexual and transsexual communities throughout Latin American and Latin communities in the U.S….according to Alex Fumero, a Los Angeles-based producer who has spent two years working on a documentary about him.

“‘This is a culture that’s been dominated by machismo and homophobia for a very long time,’ Fumero said in a phone interview. ‘He was really brave’.”

Mercado, who also wrote, acted and danced, began to appear regularly on TV in 1970 and his flamboyance soon proved a hit with audiences. His Wikipedia page records that he studied “astrology, the tarot and other psychic disciplines”. Among many accolades, in 1986 “Mercado was awarded the title Mr. Televisión by the Asociación de Cronistas del Espectáculo de Nueva York (Association of Latin Entertainment Critics of New York). By the end of the 1980s, Mercado had authored seven books, of which one, Más allá del horizonte (Beyond the Horizon), was published in three languages (Spanish, English and Portuguese)”.

Susan Miller, the founder of leading astrology website AstrologyZone.com, wrote a Time magazine tribute titled: How Walter Mercado Changed the World of Astrology. She observed: “He was the original individualist, far ahead of his time, and I feel I’m successful in part because of his work. All astrologers stand on his shoulders, for he led the way – and the world will miss him too, as there will never be another Walter Mercado”.

Mercado was born in Ponce, Puerto Rico. Over the years he claimed to have been born in 1932 or 1938 and worked in a few myths about the circumstances of his birth, such as that he was delivered aboard a ship. But his birth certificate records that his birthday was on 25 April 1931 at 6 a.m. in Ponce. Eduardo Castellanos found the birth certificate, hence the strong AA Rodden Rating. Astro-Databank has more details.

Mercado’s fixed/earthy horoscope shows he was a double Taurus with chart ruler Venus in Pisces in the 12th house, underscoring mystical and artistic interests. With Moon and Mars in Leo, theatricality was always going to be part of him. Jupiter and Pluto in Cancer close to IC indicate the extent of his appeal within his Latino catchment – Saturn (as Locomotive lead) on MC denoting a life dedicated to career. Although air is unrepresented among the planets, Part of Fortune is in early Aquarius, a hint that he may have had to work assiduously to develop the pioneering persona that became celebrated.